” The problem with most piracy debates is that the only “cost” they discuss is money-dollars.  So, the problem is framed somewhat like this:

“Buying the game from us costs money-dollars.  Pirating it costs zero money-dollars.  Therefore, most people will pirate the game if they have the choice and we must do everything we can to physically stop them.”

The familiar Money-dollar ($M)  This is wrong because there are at least four currencies involved here, not just one (money-dollars).

I propose the following:

Can we somehow get the linked essay delivered to all the games, music and movies Executives?

“But that’s not even the interesting part. The movie goes out to theaters, DVD, and high-definition cable TV – all on the same day. […]

WIRED: Why did you decide to release Bubble in all formats at once?

SODERBERGH: Name any big-title movie that’s come out in the last four years. It has been available in all formats on the day of release. It’s called piracy. Peter Jackson’s Lord of the Rings, Ocean’s Eleven, and Ocean’s Twelve – I saw them on Canal Street on opening day. Simultaneous release is already here. We’re just trying to gain control over it.”

My God man, Sanity! When will this end?!

“Give us convenient content at a reasonable price, and we’ll buy it. Sell the stuff without DRM, for a few dollars. Make it available to everyone, worldwide, at the same time. Then take the massive, unending pile of money, forever.

Or keep doing what you’re doing, and enjoy your ceaseless war of attrition, ever-rising tide of negative public opinion, and eventual forced irrelevance. And get fucked.”

You should really the full article. Nothing that hasn’t been said endlessly but it’s a good summary of the subject. And the “piracy threshold” chart is also interesting as a tool for further business approaches to the subject.

The most strange think that i can’t understand is: if there are endless stories about how “easy and convenient and just” made people pay for their content, why is that some media executives never get to find it? Is the Internet Browser on their computers riddled with DRM to prevent them from ever reaching sane conclusions?

“Like the curtain finally falling from the Wizard of Oz to find just a small, frail, man pretending to be far more powerful and relevant than he really was. Microsoft’s biggest miss was allowing the world to finally see the truth behind the big lie — they were not needed to get real work done. Or anything done, really.”

Exactly! I also think/thought that MS should have put Office everywhere, and not a minute too late, but as stated by Patrick’s insightful wife, every minute they wait their mindshare erodes more and more.

That being said, i don’t think that there are a lot of good alternatives for Office right now. I like Libre/OpenOffice but it has so much limitations and just plain bad design (aesthetically and functional) that is hard to recommend it for other than the small “domestic” work. I do have high hopes for the IBM Lotus Symphony though. (( Soon to be known as Apache OpenOffice IBM Edition, a truly Microsoftian naming. ))

Megaupload made a LOT of money distributing content which they did not hold the copyrights for. Which means, THEY made money, the authors and publishers and illustrators and musicians – DID NOT.

You’re also wrong about the ownership of ideas. True, one person cannot ‘own’ an idea, but he does own the rights for the manifestation of that idea. If you wrote a book – even if it’s the same old story – it’s still something you’ve created for other people to enjoy… if you want to do it for free, it’s your choice! But the world should not FORCE you to do so. That’s why there are copyright laws – we are going to see a whole lot less quality content because of two very big movements:

from Pachino on a comment on Paulo Coelho’s blog

You’re missing the point there. Yes, megaupload made money of allowing the download of “free” works. You’re absolutely right on that. And yes, no one paid the authors. Yet why didn’t the authors, publishers & producers got in on megaupload model of business? They could perfectly well have said: “here’s our works, sell them as a part of a cheap 20$ for 25GB of download up to 3 months, no DRM. Pay us the percentage of income.” or even just the percentage of the advertising business.

That would be a simple deal. The consumer knows he’s doing a “legit” business, paying the persons he respects and admires, megaupload would get paid by providing the interface, and the sheer convenience of the whole thing would make people join the idea and spend their money there.

I prefer ten thousand times to pay for my content and get it all nice and clean and properly tagged, with a nice pdf booklet or stuff and to go somewhere “nasty”, full of popups and strange hacks, and never having certainty of what i’m downloading.

But you know what i don’t like? being treated like a criminal moron. Having to spend 10 minutes reading FBI warnings, about me pirating the movie i just bought, or watching unstoppable & unskippable trailers. Or waiting 2 years for the movie that i want to see becomes available in my “geographical dvd” area. Or paying over 25$ for the recording of a music performed by a maestro, orchestra and composer dead over decades&centuries ago. Or not even having the “privilege” to get those works because the editor, publisher or distributor couldn’t care less.

You know what else i don’t like? That if i develop a new combustion engine, or a new cancer vaccine or a new pain killer, or even a new kind of prosthetic material, i get to have the “monopoly” of those “idea fixations” for exactly 20 years. no more. And i have to pay for them in every country in the world. And if it is health related, i will probably spend half of those 20 years doing mandatory safety tests. And somehow, this other guy that “recycles” a impossible love story into book or films, a little folk tune in to a techno music gets to have his life plus 70 years. I’m sorry can you somehow explain to me what possible benefit can came to society from that aberration?

And now you say, “well it’s our god given right! to the ownership of our creations!” Well, sorry, it’s not. The intellectual property laws were enabled and created by the Society, to promote the general development of arts and science because that would in turn benefit the Society. The purpose of the intellectual property laws is not to pamper rock stars or authors or even geeky engineers and chemists, but to benefit the society! That is its ultimate goal. The way how it is done, is a reflection of the ways available on their time.

And here we are, somewhere on the fifth/sixth millennium of human civilization, provided with the most magnificent tool of creativity and information distribution since the Gutenberg’s Press or the alphabet and writing, and there’s some ten thousand schmucks (all of the antiquated publishers and some silly artists) trying to stop the movement and development of rest of the seven billion of us. How do you guess that’s going to end?

“When you’ve eaten an orange, you have to go back to the shop to buy another. In that case, it makes sense to pay on the spot. With an object of art, you’re not buying paper, ink, paintbrush, canvas or musical notes, but the idea born out of a combination of those products.

‘Pirating’ can act as an introduction to an artist’s work. If you like his or her idea, then you will want to have it in your house; a good idea doesn’t need protection.

The rest is either greed or ignorance”

Artists are (usually) not the main problem here, the intermediaries are. They are the ones afraid of losing the power and revenue that comes of mediating between artists & idealists and the world.

The sad part is that they could change as well and get the best spot on the new land grab, but they are just too dumb to see it. So they will wither away, mourned only by the sounds of an angry crowd armed with pitchforks. 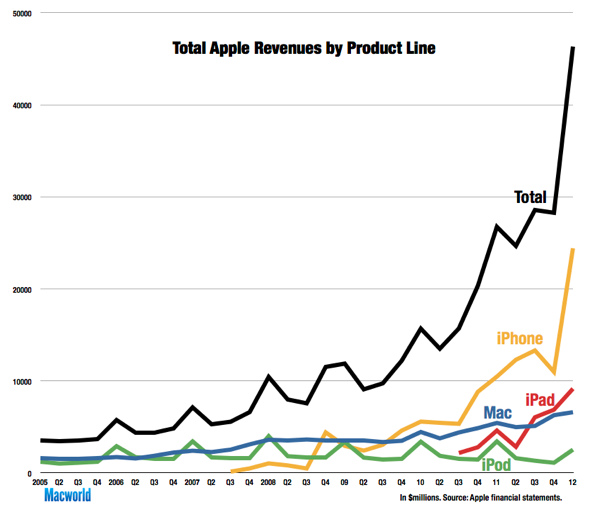 Apple’s 2011 Q4 results. Guess there was no problem relating to the Thailand floods…

It’s also interesting to note that the iPad is already a bigger business in revenues than the Mac, a “premium” computer line. Not sure if i actually like that (( in the sense that will probably lead to a prioritization of efforts by Apple on iOS and iPad related software and even less attention on the Mac OS X side of things. )) but it is undisputedly a sign of the times. (( There’s a couple more “holys” by Robin here))

“However, the attempt to ban cars caused Petro Dale to wake up to the threat of railways. They realized that even though much more commerce took place with cars and roads, and even though railways were becoming increasingly irrelevant, they would remain a potential regressive threat. In the past Petro Dale had sought to do business with the incumbent food network distributors, suggesting ways of taking the mass market food produce and distributing it to new franchises like mobile food trucks and fast food restaurants. They were spurned. Now they realized that trying to work with Fernforest was not just futile but  harmful.”

How the internet displaced/will displace the old media distributors/publishers, in a nice metaphor story. The funny bit is even if the current MPAA, RIAA and their associates management personnel read it, they wouldn’t understand it.

“The MPAA studios hate us. They hate us with region locks and unskippable screens and encryption and criminalization of fair use. They see us as stupid eyeballs with wallets, and they are entitled to a constant stream of our money. They despise us, and they certainly don’t respect us.”

“Wait, but what about the bookstores’ owners and employees—aren’t they benefitting from your decision to buy local? Sure, but insofar as they’re doing it inefficiently (and their prices suggest they are), you could argue that they’re benefiting at the expense of someone else in the economy. After all, if you’re spending extra on books at your local indie, you’ve got less money to spend on everything else—including on authentically local cultural experiences. With the money you saved by buying books at Amazon, you could have gone to see a few productions at your local theater company, visited your city’s museum, purchased some locally crafted furniture, or spent more money at your farmers’ market. Each of these is a cultural experience that’s created in your community. Buying Steve Jobs at a store down the street isn’t.”

Although i have a soft spot for a physical library and i romantically fantasize about them as a sort-of-temple of wisdom and knowledge, the hard truth is that i have hardly spent any time in one in the last years. I’ve purchased a couple of books online, received others as gift and read many stuff online or in my mac. (( no doubt also related to my current working life ))

And when or if i resume to my voracious book devouring life of the good ol’days, it’s very probable that i will do so resorting to Amazon. You simply can’t beat those prices and as Farhad says, with the money i save there i can either buy more books or indulge myself in other cultural&local activities.