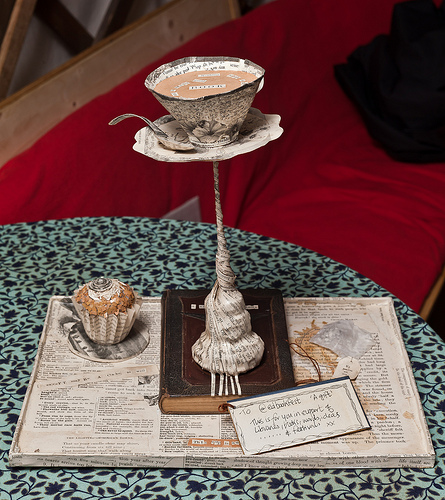 Someone is dropping secret paper sculptures around libraries in Scotland! Amazing craft and beautiful ideas. You can read the whole story at “.” (yes, that’s the blog name: a dot!).

“On Wednesday evening, with a post to Google+, Pike announced that Ritchie had died at his home in New Jersey over the weekend after a long illness, and though the response from hardcore techies was immense, the collective eulogy from the web at large doesn’t quite do justice to Ritchie’s sweeping influence on the modern world. Dennis Ritchie is the father of the C programming language, and with fellow Bell Labs researcher Ken Thompson, he used C to build UNIX, the operating system that so much of the world is built on — including the Apple empire overseen by Steve Jobs.

“It’s really hard to overstate how much of the modern information economy is built on the work Dennis did.””

I would say “the shoulders where we all stand on”. Was looking to write something on Dennis Ritchie since the notice of his passing came public but Wired does a better job than i could ever do. You should read the article to realize who exactly was Dennis Ritchie and why he was so important and fundamental to us all.

“This is post-Gates, 21st-century Microsoft at its very worst. Oh, sure, Windows 8 ought to be a great OS. The Metro interface looks fantastic, truly revolutionary and extremely attractive. And we’re sure that Windows 8 classic will build on the stability and success of Windows 7. This isn’t Vista. Vista was a disaster of a product that actually had some half-decent marketing and crystal-clear messaging.

No, this is the opposite of Vista. Windows 8 is a great set of products with lots of potential that Microsoft is likely to tank because it’s trying to cram way too many disparate pieces into one box. Why not have a tablet OS, a PC OS and a smart phone OS? Or one that runs them all but comes in distinctly different flavors? Why try to cram two PC OSes and a tablet OS — all of which to pretty notably different things and have pretty serious restrictions — into one “product?” Software is supposed to be easy to use, not frustrating and confusing. This is slick 2010s software with overcomplicated 1980s marketing. It just doesn’t make any sense.”

Decisions, decisions.. They’re so hard to make. Specially when the man in charge doesn’t really understands what he is supposed to sell.

In times of crisis, we need men like these.

“The other big realization he had was that he can’t always build the right thing. I think Larry Tesler might have struck some kind of chord in Bezos when he said his mom couldn’t use the goddamn website. It’s not even super clear whose mom he was talking about, and doesn’t really matter, because nobody’s mom can use the goddamn website. In fact I myself find the website disturbingly daunting, and I worked there for over half a decade. I’ve just learned to kinda defocus my eyes and concentrate on the million or so pixels near the center of the page above the fold.

I’m not really sure how Bezos came to this realization — the insight that he can’t build one product and have it be right for everyone. But it doesn’t matter, because he gets it. There’s actually a formal name for this phenomenon. It’s called Accessibility, and it’s the most important thing in the computing world.

The. Most. Important. Thing.”

You should read the whole thing. There’s a lot of good insight there, not only about Google, but about Business as a whole.

“And, so far, the military has been unable to stop the virus/keylogger on a widespread scale. Repeated attempts to remove the malware from Creech’s computers have only proven temporarily successful, if that. As a kind of last resort, military network specialists have resorted to full drive wipes to combat the persistent infection. They have been using a tool called BCWipe to completely erase the hard drives’ data before rebuilding the drives’ contents back from nothing.

“We keep wiping it off, and it keeps coming back,” said an anonymous source to Shachtman. “We think it’s benign. But we just don’t know.””

You’ve got to be kidding. How is any virus/keylogger that can’t be eradicated benign?

I can just see it. The white-hat hacker spending endless nights in front of his machine, coding, tweaking, making redundant features so it can’t be erased, and in the end he writes the payload:

Imagine there’s no Heaven;
It’s easy if you try;
No hell below us;
Above us only sky;
[…]

Yep. It makes perfect sense. And what’s great about it is that it just spread to the control of armed with precision explosives flying autonomous vehicles. No harm can come from there right?

And if you have any problems with the keylogger virus, just unleash Skynet on it. I’m sure “she” can quell that nuisance for you.

When you thought you couldn’t see anything stranger (and dumber) than fiction, then comes reality…

Update2: It’s here alright. You can download it and install it. But beware as it is still highly experimental. It seems to have a lot of potential though.

Finally! It’s here, it has arrived! Open Media Vault, the Debian based somewhat-successor to FreeNas is launched!!

I’ve been consulting the site for over a year and half or so, waiting for a chance to download the software, but the lead and single developer kept us all on the hook for it.

I respect immensely any one that can do such a feat single handedly but i must admit i was loosing my patience waiting for it; specially because i’ve got a low-energy consumption device waiting for it! Couldn’t get FreeNAS to recognize the esoteric hardware, couldn’t get any Fedora based distro because the processor wasn’t a “modern” i686 (despite running at 1GHz) but Debian, faithful to itself, runs like a charm on it. So will Open Media Vault i expect.

Now, there’s just a little problem… I’m away for the weekend so i can’t try it out!

I’m trying out Feedburner to monitor the amount or RSS subscribers to this blog.

You should have no problem with the RSS feed from this site but in case you do, send me an email or comment to let me know.