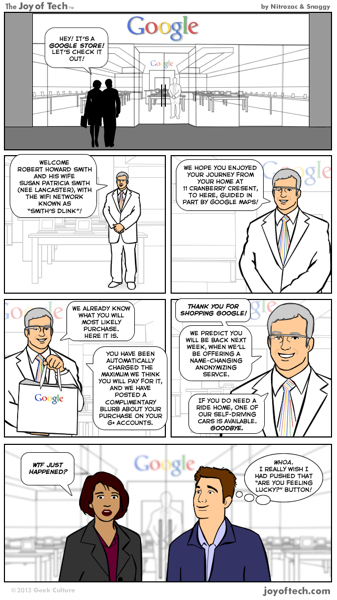 The Joy of Tech at Tapastic.com

Businesses also have a responsibility to protect customers. As one contributor said, the term “identity theft” is now commonplace to describe what happens when a fraudster manages to pose as someone else, whether online or in a financial transaction. How identity is verified sits at the heart of internet security. Could using a login from a big internet identity such as Facebook or Google to access other websites be the answer?

“You can use Facebook to log in to a bunch of things. I’ve never used it, though it pops up all the time, because intrinsically I don’t trust it, I don’t like it, I don’t think it is a good idea,” said one panel member.

It’s amazing that such obvious statement had to come from a “security guru” in a security roundtable for people pay notice to it. You really shouldn’t use Facebook in the first place but if you do, don’t allow any other site or app to have access to it and don’t use it as some sort of universal key. You’re just inviting yourself to a lot of pain.

However instead of boarding her flight, Ibrahim found herself in handcuffs – detained by the San Francisco Police Department before being searched and locked in a holding cell by TSA agents without explanation as to the reason for her arrest. After being interrogated for several hours by the FBI it was revealed that she had been placed – for reasons not revealed to her – on a No-Fly list which prevented her from routinely boarding her flight. Despite this Ibrahim was cleared by the agents of being a security risk, assured there would be no future problems, and allowed to board a flight for Malaysia the following day.

However upon attempting to return to the United States after her trip, Ibrahim found herself again detained and prevented from boarding her flight by local authorities who had received instructions from the US Consulate that she was to be barred from returning home.

It has now been eight years and Ibrahim has still not been allowed to return to the United States, banished based on secret evidence which she is unable to view let alone contest and trapped in a Kafkaesque legal limbo which has made her an effective exile from the country.

As shocking as Ibrahim’s situation is, it is not unique; over the past decade there have been countless documented cases of individuals who have suddenly found themselves permanently stranded abroad after being banned from the United States despite holding legal residency and/or citizenship in the country.

Take the Clinton doctrine. The Clinton doctrine was that the United States is entitled to resort to unilateral force to ensure “uninhibited access to key markets, energy supplies, and strategic resources”. That goes beyond anything that George W Bush said. But it was quiet and it wasn’t arrogant and abrasive, so it didn’t cause much of an uproar. The belief in that entitlement continues right to the present. It’s also part of the intellectual culture.

Right after the assassination of Osama bin Laden, amid all the cheers and applause, there were a few critical comments questioning the legality of the act. Centuries ago, there used to be something called presumption of innocence. If you apprehend a suspect, he’s a suspect until proven guilty. He should be brought to trial. It’s a core part of American law. You can trace it back to Magna Carta.

So there were a couple of voices saying maybe we shouldn’t throw out the whole basis of Anglo-American law. That led to a lot of very angry and infuriated reactions, but the most interesting ones were, as usual, on the left liberal end of the spectrum. Matthew Yglesias, a well-known and highly respected left liberal commentator, wrote an article in which he ridiculed these views. He said they’re “amazingly naive”, silly. Then he expressed the reason. He said that “one of the main functions of the international institutional order is precisely to legitimate the use of deadly military force by western powers”.

In the “web vs. apps” war, I think you can infer which side I’m on. I wouldn’t download a BBC app or an NPR app for my computer. Why would I want one on my phone? Do I buy a separate radio to listen to different stations? No. The functionality is the same, the only thing that differs is the content. Apps ought to provide some actual functionality, not just blobs of content wrapped up in binary files.

The worst thing in this fashion i’ve encountered was the Haaretz iPad app. Not only it provided you a worst visual design than the site, but it keep bothering me for a paid subscription and not allowing me to read news that were freely available on the website. I’m sure there’s some hidden wisdom on this sort of behaviour but i fail to see it.