There’s an educational wifi network in most of the european universities called eduroam. It’s a “enterprise” network, using an 802.1x security certificate, so you need to install your institution certificate file before using the login and password.

I was trying to help a coworker configuring his brand new Android phone. I thought it would be rather simple, as I had previously configured a iPod Touch a year or so ago and it was just finding the file and importing it. Nop. Not a chance.

So, a quick case study of what needs to be corrected by Android in user friendliness before actually announcing to the world that it is the new Master…

Setting up an iOS device:

Setting up an Android device: 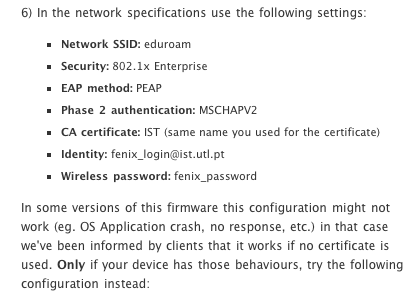 This is just an excerpt of the 20 steps or so of the configuration procedure. !? After 20 steps of a tedious process, you still might find that it will or it will not work, and if not maybe try again with these settings…

Some team really needs to go back to the “drawing board”…

I’ve just discovered that my Late 2008 Aluminium Unibody Macbook is actually able to have 8 GB of RAM memory instead of the 4 previously announced. So, a 2008 laptop is able to be upgrade from 2 to 4 and now to 8 GB of RAM.

If only SSD drives would become more affordable and with larger capacities this “baby” would be all equipped and a hell of a machine. And deadly silent as well. Even if just a whisper as the Macbook has, I hate ventilation noise. It removes most of the pleasure of being quietly in a silent room working.

Now show me a 2008 equivalent “PC” laptop, with equivalent cost at the time, that has this expansibility and can be upgraded to the this kind of “contemporary” levels. Most of them in 2008 could only deal with 3 GB of RAM.

It annoys me that i have these frequent argument with friends or co-workers about why I have decided to buy a Mac. I have come to a point where i gave up trying to explain the perceived qualities and just blankly ask if they ever worked with any other system besides Windows. And won’t argue anything else if the answer is “none”.

It is not that Windows is a bad system. It’s just that any other current option is better. Linux is amazingly fast, stable,and secure. And the Mac is all that and neatly integrated, with an amazing attention to detail. Which unfortunately lacks in many Linux distros. And is pretty much absent in Redmond products.

So, yes. It is for this kind of surprises and reliability that i have bought a Mac. That 2,5 years passed it still rocks, it still has great look and no cheap hardware failure as ink-less keys. It still works perfectly, without any specific maintenance. I only formatted it once because i decided to upgrade OS and hardware at the same time (more disk space and 2 to 4 GB RAM), although theoretically even that wasn’t necessary. And when I formatted it, I could just import my user settings from Time Machine and everything was just as before. My bookmarks, my mail, my configs. Out of the box. Without extra costly software. And without extra hassles.

And now i can just buy 8 GB and slap it in. And run my baby even faster and nimbler than it is. Yep. Now tell me that doesn’t justify the “Apple tax” i keep hear talking. I compared back then and the Mac was actually the cheapest with feature-to-feature comparison. Now it still is. Even more.

Used to be a very tricky thing at Apple’land.

Apparently with the launch of the new ipad they just managed to got it right?

So why are so many people fixated on “the true definition” of multitasking on a phone? These are the same people who are constantly closing apps that are running to save battery life. Why should you have to do this anyways? Doesn’t it seem insane that you are manually flipping apps on and off to save battery?

Yep. Exactly. And exactly why i gave up the idea of acquiring an Android Phone. I’ll just get a cheap “feature phone” until I can buy a cheaper iPhone or the new Hp WebOS phones are available and I can try one out.