One weird thing about iOS 6 is that Apple’s built-in apps are suddenly even more inconsistently designed than ever. Some apps, like Safari and Settings, retain the old blue-gray look and feel, while others are dark gray with black accents (Photos, iTunes, App Store) or just dark gray, light gray with dark gray accents (Music), a new bluer-gray (Videos), or faux-wood (iTunes U and Newsstand, both of which—seriously—feature differently colored wood designs!). I await someone’s impassioned defense of this Crayola strategy. 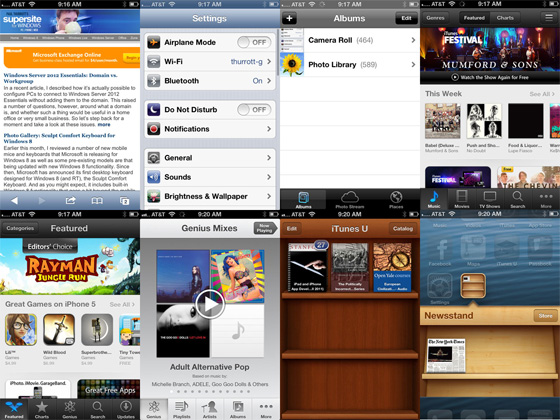 If you are using an iPhone, iPad, or iPod touch, iOS 6 is of course a necessary upgrade, even with the Maps silliness. Looked at from the outside, however, there’s not much here that’s worth fretting over. If you’re using Windows Phone or Android, you can at least rest easy knowing that only Apple’s devices are truly lust-worthy, and then only until you bring them out in the real world and scratch them or break the screen, which is especially a problem for iPhones. But the iOS software that runs on these devices is showing its age. And Apple shows no indication that it’s ever going change that from strategy. This is a big opportunity for the competition.

Couldn’t agree more. Apple should really take a break, and decide where it’s going in the interface area. And then do a full house cleaning, both on iOS and Mac OS X. This mess is ridiculous and seriously makes me doubt of what will be Apple’s future. I intend to use my Macbook another couple of years, easily. But when I finally need a replacement, will Mac OS X still be the incredibly usable and clean OS that I “fell in love” with?

A couple of years of ago, even though I seriously hated some of Apple’s idiosyncrasies, I wouldn’t have any doubts that my next computer would be an Apple too. Since Lion, with its unusable Versions and Mission Control and the whole skeumorphism aura and iOSification, joined by iOS own compound of mistakes and silly restrictions, and, of course, the cherry on top was Snow Leopard’s lack of iCloud integration and iOS sync, I’ve started seriously worrying about my next computer.

Now i’m not so sure that it will be a Mac. Whenever i have the option of spending money on some software i wonder if I will still be able to use it on my next computer. The question is, what could it be? And for that, there’s still no good answer. For now, Apple and Mac OS X continue to be the best answers. But i worry about the future, if those diverging currents inside Apple are not resolved and forced to fit together. Apple should figure out what it wants to produce, for whom it is producing it and then clean house. You can’t continue to market a “productivity advanced” OS (as Mac OS) and then just dumb it down to the unusability of versions, or iCloud Sync.

My previous password has been around 30 chars in size and now, it doesn’t work anymore. However, I could login by typing just the first 16 chars.

This limitation is well known (see Graham Cluley’s excellent post on the password limits of various services) however, what caught my attention was that by cutting the password to 16 chars, it would work.

To pull this trick with older passwords, Microsoft had two choices:

* store full plaintext passwords in their db; compare the first 16 chars only * calculate the hash only on the first 16; ignore the rest

Storing plaintext passwords for online services is a definite no-no in security. The other choice could mean that since its inception, Hotmail was silently using only the first 16 chars of the password.

To be honest, I’m not sure which one is worse.

Microsoft: Screwing up security and best-practices since, basically, ever!

I assume there’s nothing wrong with the water up there in Redmond, so why do MS keeps doing this kind of stupid things and just not giving an jota about security? Or Standards? Or just good engineering?

Another good example is this one:

Microsoft could just have implemented some sort of POSIX compliant shell (( bash, zshell, and endless others )) all freely available, all standards compliant and all widely used in every other OS in the world. Instead they have to go and reinvent the wheel and do some half-baked effort, that probably is way more limited, way more insecure and always halfway but never there.

Update: To answer the original poster, apparently is the last one, MS has always only stored the first 16 characters of your password and simply ignored all the remaining ones.

I’ll try to keep it simple. I do not like skeuomorphism at all. It kinda makes sense and works on iOS, because you actually hold the device and touch with your fingers, but whyyyyy on the Mac… hate it. So I had nothing to do and took scissors and brush and pulled the damn leather off my Mac running Mountain Lion. I shared this for a friendly discussion about skeuomorphism and how does it improve anything?

Let’s call this an experiment about how the ML would look without skeuomorphism crap. 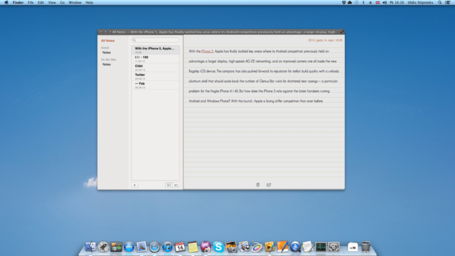 It looks so… Usable! I’m seriously worried about the direction Apple is taking with Mac OS X (( yes, i still call it by its name, Mac OS X! )) and just looking at this experiment makes me understand and have a better feel of why i loathe the current appearance and working of some of Apple’s recent apps.

The worst thing about it is that it feels like Jekyll and Hyde. There’s effectively two Apples. I fell in love by the clean, minimalistic one and now i’m afraid i will have to endure the ugly, excessive, noveau-riche silly one. I’m still on Snow Leopard very much (also) due to this. Maybe i will update to Mountain Lion but seriously, i’m waiting. And hoping desperately that by 10.9 Apple and Mac OS X will get back on track.

But i make no idle threats. Because, unfortunately, there’s no other option out there. And that just makes me sad.

Last weekend i was at my grandmother’s place, helping out the restoration of an old bedroom with my family. Among endless old things we’ve found out a box full of old pictures from my grandfather that i’m now digitalizing for future preservation and to share among our very big family. But while i’m doing this, i’ve encountered something of a “pickle”; most of the pictures have handwritten info on their back, so that we now know who’s who and where it was taken which is great! But how can i store this info?

Please keep in mind, that there are two goals for this:

So, please if you have any tip or hint to give me just write it down on the commentaries or drop me a line ((

)) (info here or on the footnotes). Appreciated for any help and inside knowledge from those who have done this before!

John Hunter, author of Matplotlib, founding board member of NumFOCUS, husband to Miriam, and father to three daughters: Clara, Ava, and Rahel, was diagnosed with cancer in late July 2012 after returning from his keynote address at SciPy in Austin, TX. He passed away on August 28th from complications arising from necessary cancer treatment. See the announcement email by his good friend, Fernando Perez.

John has given so much to all of us in the Python community, now is our time to give something back to his family by providing for the education and support of his children. We have setup the John Hunter Memorial Fund to provide a mechanism for individuals and companies who have appreciated John’s work, to give back to him by ensuring that his children have funds available for their education.

Almost all of the advancement of mankind is done by small pieces, a bit here and there that, altogether, provide us with a platform to go higher, faster, stronger. Most is done by virtually unknown to the “masses” engineers and scientists. John Hunter was one of them (us!), and he designed matplotlib, the Python library that anyone that uses python for science and mathematical computation uses.

It’s only worthy of us remembering him and, anyone that can, helping out his family and his children. Please see the link for more information

The extension was removed from the Chrome Web Store in 2009 by Google due to it’s ability to bypass advertising. It will not be developed further, sorry for the inconvenience.

youtube-html5-chrome was an extension to switch Flash for HTML5 on every youtube video on every webpage out there. Apparently Google forcefully canned it. So nice of them. I just love, love those text tags over the video i’m trying to see…

The Mac offers me access to most of the programs and/or tools that I need, and most importantly is *nix under the hood (unlike Windows). I can sit down and go immediately to the task or job I need to work on, without the various idiosyncrasies I’ve experienced in other *nix desktop environments.

The Mac was, for me at least, the very first environment where I did not have to worry about the OS or system. I could just sit down and work. Of course, controlling hardware and software makes that easier for Apple than just about anything else. Still, it’s a powerful feature that doesn’t appear on any box.

I am, however, waiting anxiously for the “shit apple-haters says”. Those are the most curious folks: “Everything with an apple is the work of the Devil!!”.

How did so many get this so wrong? I fear it betrays something ugly about the way tech reporting works–and doesn’t work–these days. Depth, expertise, and reflection are all lacking. So is serious research. If you are going to write about a patent case, it’s a good idea to read the patents in dispute. Reading patents is not a particularly pleasant business. The language is tedious, legalistic, and often deliberately obfuscatory; you want to give the Patent Office the required information while giving away as little as possible to your competitors. But reading the claims, the critical section of the patent, isn’t all that difficult. There are a total of  101 claims for the three patents and they fill about five printed pages. Yet I suspect very few of the people who wrote about the trial actually made the effort. If they had, they would have known that the range of gestures covered was much narrower than has generally been reported.

I’m not sure where the idea that pinch and stretch was at stake originated. It seems to have crept  into the trial coverage at some point and become part of the folklore of the case. And when the jury announced that it had found infringement by Samsung on all three utility patents, a large number of writers seemingly assumed that one of those covered the gesture. In the case of rounded rectangles, Samsung’s obfuscation certainly contributed. So did a general hostility toward the entire patent system in the tech community, including tech writers, which created a readiness to believe in the most absurd interpretation of the outcome.