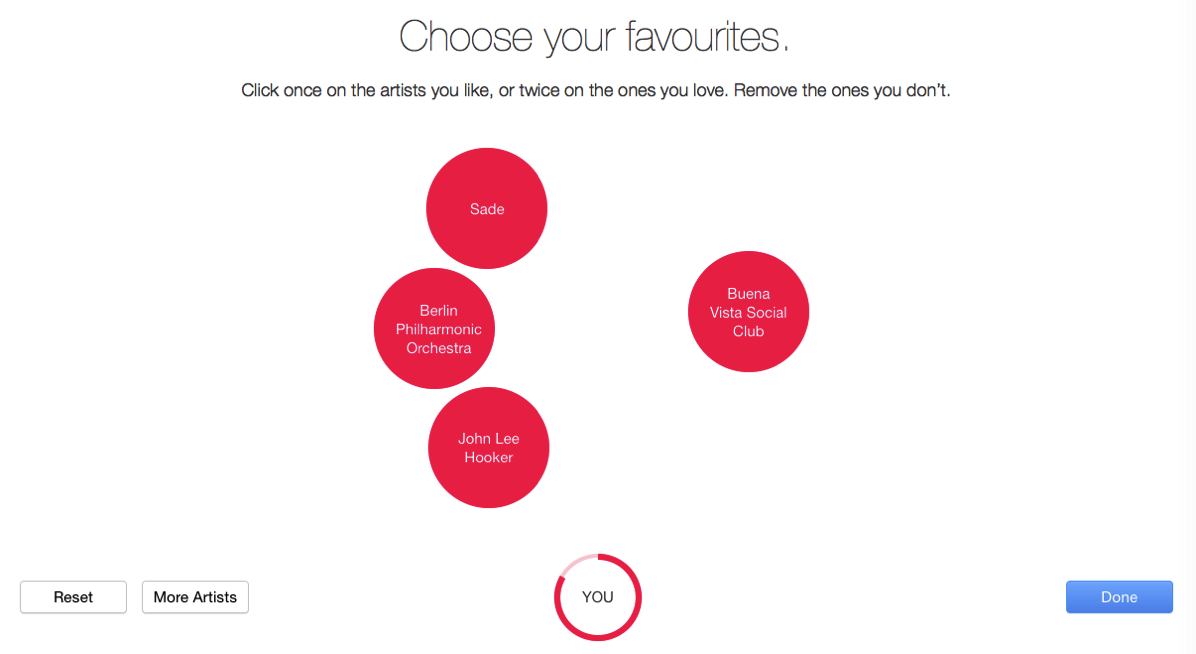 It’s probably the fourth time I’ve done this and i still can’t continue… random artists i don’t even know or remember who they are, no way to listen to their music, no pictographically icons or images so that I might recognise them. It’s resorted to a list of artists that I recognise and that I don’t dislike that much. And I still can’t continue.

Seriously. Ask me: “name 6 artists you like or listen frequently” and I’ll have no problems writing them down for you. What the hell are these nonsensical bubbles for? They’re a pain in the ass, ineffective and annoying as hell. If you can’t figure out from my iTunes playlist who I listen more, then just allow me to write them down. This is just retarded. 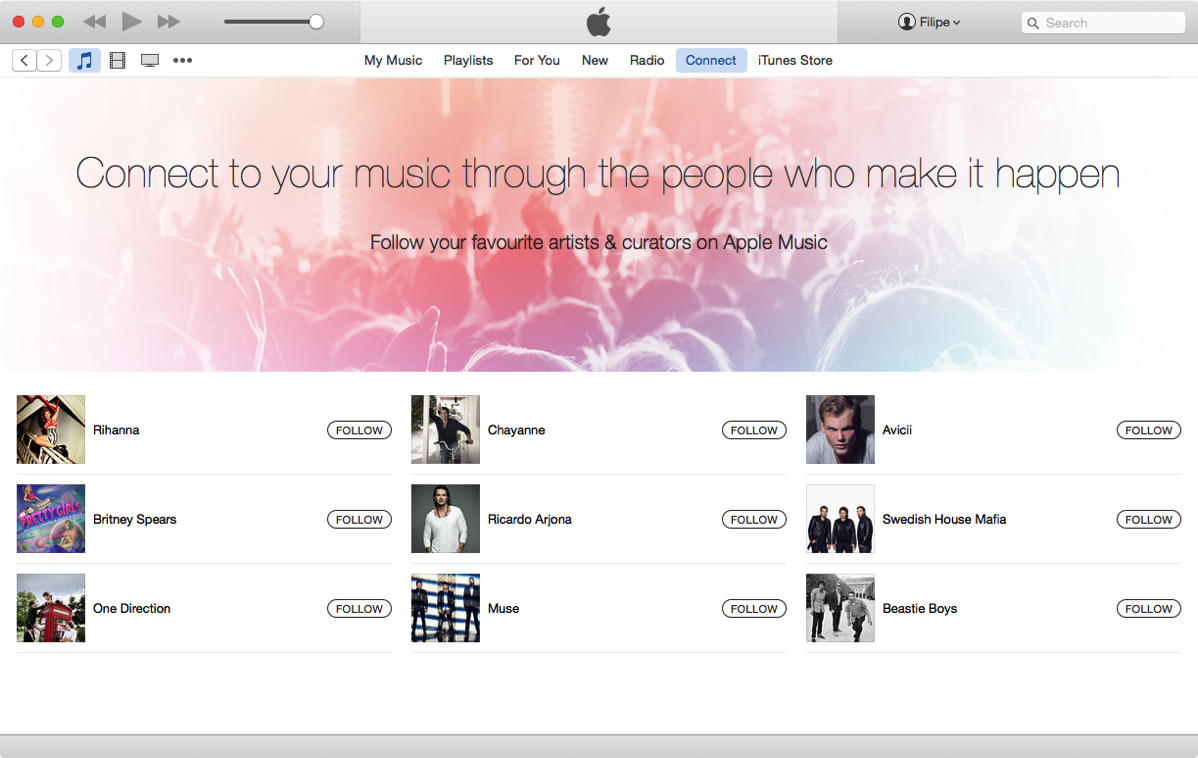 … sigh again. I don’t like nor want to follow anyone on this page. Now what? What’s up with the f***ing interface design Apple?

In case I wasn’t perfectly clear on the last post, and because I’m trying to listen to Beats 1, for the second time, THERE. IS. NO. MONOCULTURE. WORLDWIDE.

I assumed this wasn’t required to explain to a large corporation as Apple but apparently it is. Beats 1 is just a online radio. That’s it. There’s nothing innovating or particularly brilliant here. In fact there isn’t even nothing particularly useful here! What you listen in New York or Los Angeles is not the same to what someone listens in Lisbon, Madrid, Paris, Bombai, Luanda, Cape Town, Brasilia or Lima…

I fail to see why Apple is actually wasting its resources here, instead of leaving this to a plethora of third parties and partners, regionally relevant and interesting. It’s not like Apple doesn’t have a plethora of issues to fix, if there’s enough resources to waste on crap like this, I expect no more basic low level bugs, usability short-comes and crappy own-offerings such as iCloud Drive and the current version of iWorks.

Seriously Apple. FOCUS THE FUCK ON. Stop spreading your efforts in a ton of things that never work reliably or even work at all. Focus on a core, make it bullet proof, and leave the rest for third parties to build on. Get your shit together. 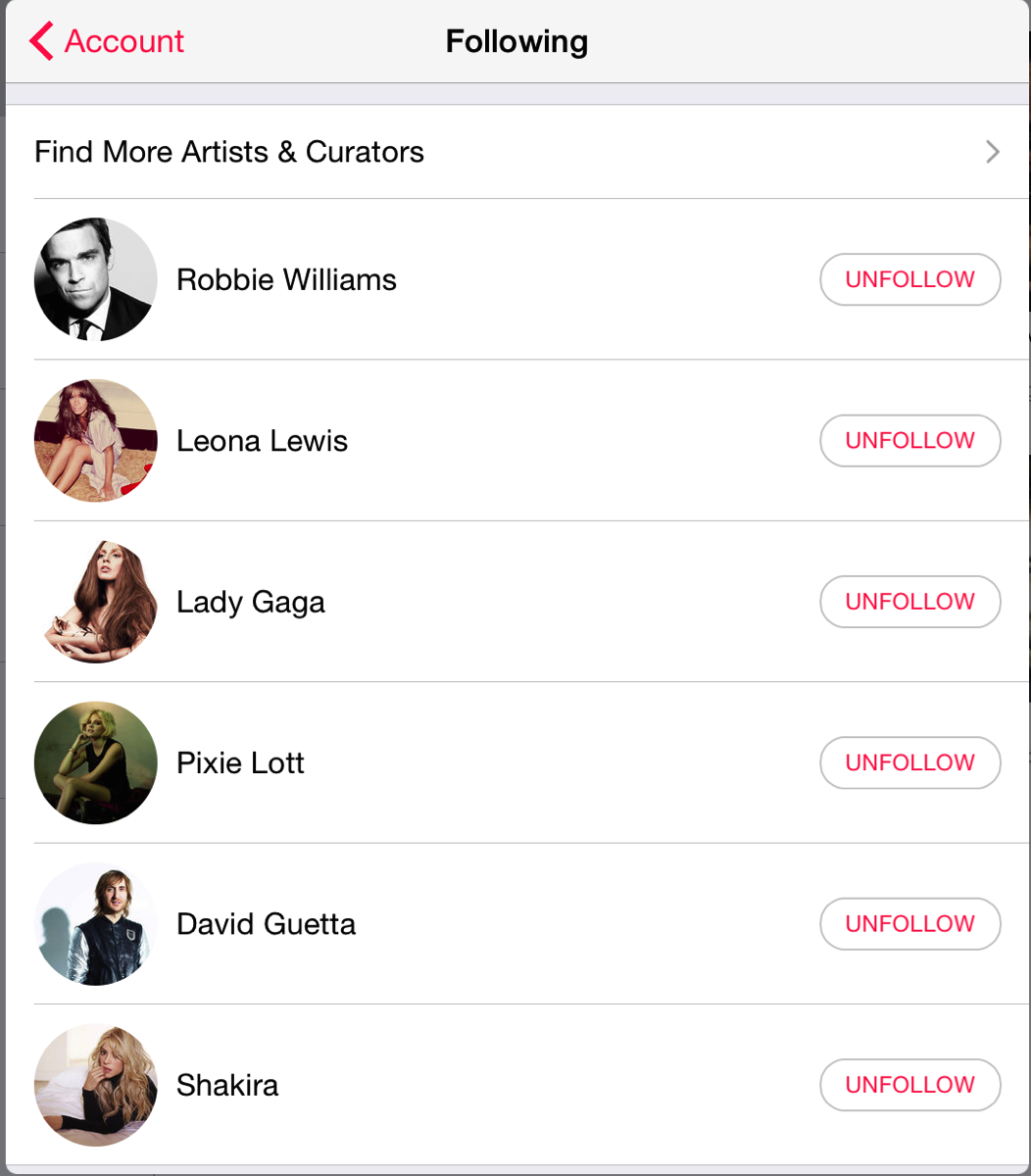 While they haven’t fix the Home Sharing issues, they seemed to have decided that I would be interested in following these artists. It’s amazing how Cupertino has become small minded, presumptuous and unware that there might be more than the Top Ten list on iTunes sales… And how instead of asking me to select a bunch of artists to start following they automatically added me these… don’t even know how to call them… I don’t listen to a single one. Apart from Robbie Williams which has a very nice Jazz CD. His only CD that I listen.

I was already shocked at the “monoculture” scream that they actually intended to launch with Beats 1 and 2 and 3. It was amazing to me how a company like Apple couldn’t understand that not everyone in the world listens or even cares, to the anglo-saxon focused music that they listen to. It’s now even more amazing how they don’t understand that polluting a product launch with a set of an undesired defaults it’s worst that not having defaults at all.

Sigh… If this is our best offer in the field of Computers and Operating Systems, it’s a cry of help for the others.

“Home Sharing” on iTunes between an iOS and OS X device was spotty at best. So, with this new release of iOS 8.4 and OS X 10.10.4, where the dreaded DiscoveryD was finally put to rest, what does Apple do to fix this spotty working? Eliminates the feature completely obviously.

Oh Apple… I don’t know if I’m more disappointed or angry at your utter incompetence lately. Seems like Microsoft’s Marketing Department took over the reins at Cupertino, with its very specific touch of “geniality”…

"featuritis" -> the random believe that you just need to keep adding "features", despite very few of them working consistently and reliably.