So the better solution for the current Macbooks is to have a small SSD drive inside (64 or 128 GB) for system and apps and a larger standard disk outside for everything else?

It appears that by doing so you completely eliminate the hard disk bottleneck.

And can the next Macbooks generation come with Thunderbolt connector for everything inside?

Yep, definitely today ((Rumor is that they are launched specifically today as it is Steve Jobs birthday. But as all Apple related rumors, there is no actual base of information to say that. )) that the new Macbook Pro are launched. The Apple Store is already down. So let’s see what this “Thunderbolt” port can do!

To be perfectly clear i would be ok with Apple current proposal of terms of service and the App Store lockdown if:

You know, like a carrier! Either you pay the full price for the phone/device and it is yours to do as you please, or you buy it from us and play in our walled DisneyWorld.

Apple currently wants to own the best of two worlds. You pay full price AND you have to play in their walled AppleWorld where everything you do gets them a piece of the action.

You can’t always get what you want, as Mick would say. 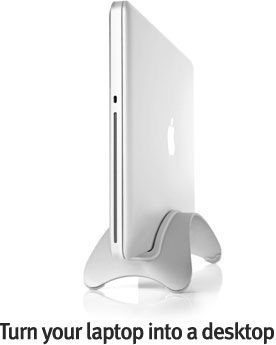 Besides Twelve South Bookarc, is there any others vertical stands for a Macbook (unibody late 2008) in clamshell mode? I’m setting up my office “desktop replacement” environment and want to put the mac vertically to save space. ((although terribly afraid of hitting it with my elbow or other and dropping it.))

“Rules change when you play in someone else’s backyard — it sucks, but if you are smart you can still be wildly successful. The 30% cut isn’t great (though it does look great from a strict consumers view), but it isn’t the end of the App Store — I bet it only makes the App Store better by ridding it of more junk apps.”

Ben, and a lot of other bloggers and anonymous commenters, seem to interiorize every new restriction put on the iOS app store with the same basic idea: “It’s Apple’s backyard” “they are the ones who build and maintain the app store…” “A lot of blood sweat and tears (not the song) went into these wonderful devices. ((yep. someone actually said this. you can check that in the comments section of the current Apple Pravda )) ((I actually waste an incredible amount of time reading the comments on most news sites. It gives me insight on the “horde” thinking. Sometimes there is actually a commenter who has something of value to be said, but usually is just a incredible window on what the “real masses” outside of my circle are saying. ))

But the point is that is not Apple’s backyard. It’s my backyard! I paid for the iPad, or the iPhone or other iOS device. ((For the argument sake let’s just assume that i actually have paid for one and possess one ok?)) Apple didn’t subsidised it, didn’t gave it away for free. No! They made the consumer pay for it. And a significant amount of money ((which amazingly still is a lot cheaper than all of the iPad killers out there.)) too.

So Apple sells a device to consumers and restricts consumers from installing apps from other sources than her own store. OK. I can live with that. As long as Apple then surrenders any kind of “moral” control or censorship. Because there should only be only two options on the table.

Right? No. There is also a third option which shouldn’t exist:

Or that I can’t buy magazines and other in-app purchases at the price that the publish or developer believes is right? Hasn’t he already paid an Apple iOS subscription? Is he not selling to me, the consumer who already paid for his iOS device, an extra content, whatever that may be, that doesn’t involve Apple service or servers? So why should Apple get a cut on this? Their cut was the 499€ the ipad costs here. (( A quick guess: is that more or less than 499$?))

Apple is going on a wrong path here. A path that it already had started before when the Single App Store model was implemented but which has been turning for the worse every day. Why should wikileaks app be banished but Le Monde, El Mundo, the NY Times, Der Spiegel and every other major newspaper that publishes and treats the wikileaks data not? And why should it be banished at all if no legal action has been put by the US government on the wikileaks org? And why should i, an european, living in europe, be subject to “abide” by american laws to which i have no contact?

I’m not sure if this is a matter of anti-monopoly regulation but it definitely should be looked upon by the consumer rights regulator authority. Because that’s Apple focus right? The consumers?

I agree with most of the advantages Ben and others indicate. The privacy, the convenience, the quality control of Apple Store. That’s all ok and i would probably prefer it anyway. I just don’t consider the loss of options ((freedom was a too strong word here.)) as an advantage.

My favourite radio app is at a discount price of 9,99$ at their website and the Mac App Store.

For Europeans it’s (very) marginally cheaper to buy through their website than the app store. A “liberal” (and very usual) approach from Apple to the Euro/Dollar exchange rate.

Despite the bad pronunciation of the Portuguese names (which is usual for a automated text2speech engine) i loved the graphics and presentation of this thing. Not sure about its usefulness on the long run, once the “wow factor” has rune dry though.

See it on fullscreen.

And yes, it’s my hometown! How better can it get?

Thank God Almighty, we are free at last!”

You can get a couple of nice (& free) templates for Pages, Keynotes and Numbers as well as some vectorial 3d objects for your presentations at the Jumsoft website, courtesy of the Jumsoft Team.