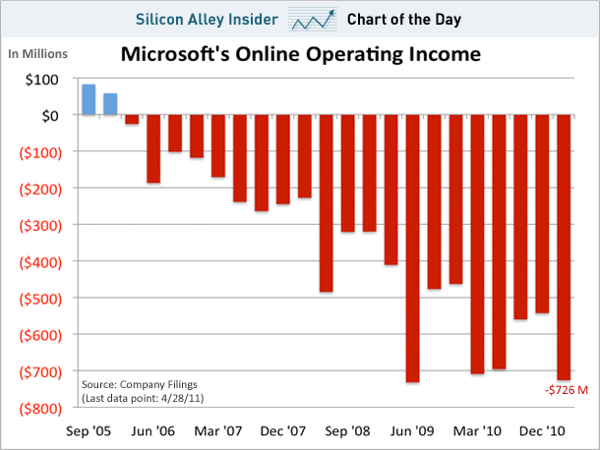 I find this graphic astonishing. If added all the losses (done roughly by the graphic bars) it means that in the last 5 years, Microsoft has wasted, without any meaning, over 8 billion dollars. This is eight thousand million dollars! Lost. Wasted. Without any significant sign of change for the future.

And for what exactly? What is the added benefit of the “online division”? Bing? Hotmail? Why are MS stockholders quiet about this? It truly blows my mind. I fail to understand what’s the point of a company squandering all those resources into something it has nothing to do with their core business, and it clearly is not the future for them.

Microsoft should join Sony and some other infamous companies into a case study compilation of companies so poorly managed that you are amazed why they are still afloat. It should be mandatory study at management courses worldwide.

MS Office has the potential to be the “perpetual” monopoly office suite for decades to come. If, and only if, it can cover all of the computer/OS bases that exist and may exist. And that means, have Office for Linux, have Office for Mac, have Office apps for iOS, ANdroid, WebOS, have a Office suite everywhere! Of equal quality and fully compatible.

If you can open, read and modify the same Office documents that your clients, colleagues, friends, and governments everywhere exchange with you, why would you want to change or bear the weight of “being different”? It would be virtually impossible to break this siege.

OpenOffice/LibreOffice only gets resources and interest because people need an alternative to MS Office on Linux and other low cost/low visibility platforms. That’s where the programming brainpower behind it resides. If there should be no need, fewer and fewer resources would go into it. And OO.org and other suites would slowly die or fade into irrelevance. KOffice anyone?

Why is this not being done? Because Windows folks won’t let them. So MS Office has areas where it is forbidden to enter. Ever. It’s like trying to win a war when you can’t step inside your enemy’s territory and you have to wait for him to come to yours. Slowly you will loose ground. And resources. And one day it will be too late to stop the full blitzkrieg attack.

What is the interest of keeping Windows alive if that means slowly choking all of Microsoft into a slow death?

And why is Windows the “soul” of Microsoft? It had DOS, it had Windows NT, it had Windows 2000/XP and now Vista/7. Why can’t it simply produce another OS, not named Windows please!, and not built on the same architectural errors, and just sell it as the new product? Apple has done it. Oil Companies are doing it as we speak, changing from Oil sellers to Energy providers. It probably won’t be easy, but it is the only sure way of having a shot at the future.

It’s like Ford still selling the old Model T (upgraded with lots of coloured fins!) when everyone around them is selling electric/hybrid cars. It makes no sense at all, except in Mr.Ballmer’s head. And tens of thousands of employees around the world are being guided by this blind steersman into a not very bright future.

Oh yeah, and i forgot, i love, i mean just love that somehow the password that is requested to install applications on my computer thought the app store, is not my user/admin password but the Apple Id password.

Somehow, Apple figures that is “safer” to use a password, that keeps going back and forth in the internet, to use a root enabled application on my computer than use my admin user password that is safely ((as safe as possible)) kept and used only on my computer. Love that. I mean just love that…

Oh, and i just remembered another wonderful features of the App Store that i love.. I keep my dock really really small. Only the apps i use every single day AND that i can interact with their dock icon by dragging something to it (like for example photos from a mail to iphoto or to the compression utility keka for compressing files.) Everything else i call through AlfredApp (a really great great launch application utility).

So that is somehow around or under 10 app icons. Now, the App store icon is the only way to know if i have any update to the (very small and every time shorter list) applications i downloaded through the app store. Remember that i can’t get no “sparkle update warning” when i run them if there is a newer version available.

Now, as i don’t want to spend precious pixel space with the ugly App Store icon, i never know when there is a update available to my applications. In fact, every single time i updated an app though the app store was because i read the news on some apple covering press site or i managed to read the warning from the app makers on twitter. (( you can find me in Twitter under the username maccouch ))

In the more busy times, where i don’t spend as much time reading or looking to this kind of crap (and obviously some times are more busy than others) i can possibly go around for weeks/months using a vulnerable buggy application without knowing.

Now how is this any good for the Mac general security? Or consumer friendliness? Is everyone supposed to put the app store icon on the dock? Or to take attention to the small red number on it? And “regular folks”, the kind that has troubles using a DMG file, will somehow take care and keep monitoring it and update every time there is one available, even if they keep using the app they want and there is no “update available” warning? Yeah, sure. If you believe that I’ve got a bridge to sell you…

Apparently now i can update Xcode.

Although teoretically evey App is updated.

This were pictures taken with a second apart. And i have restarted the App Store a couple of times before just to make sure it wasn’t a small temporary malfunction.

And did you know that for every small update of xcode i have to download 4,5 GB of (this is really what is going on folks…) an “install xcode” application that will install Xcode and i must keep on my Application folder so that the App store can keep if i have xcode installed! This is absurd. over 6 Gb for the Xcode itself and another 4,5 GB of an install app that i must keep permanently on my Application folder?

I thought the all purpose of the App Store was for “easy” application finding, management and updates… 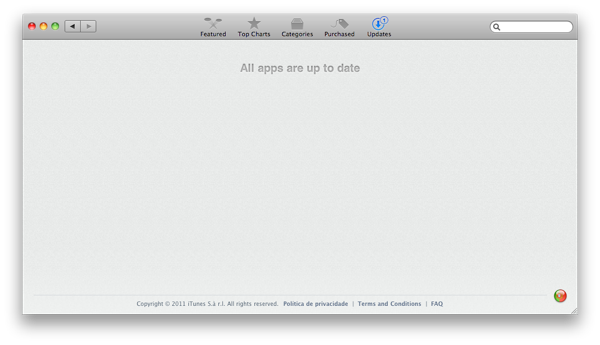 Until now i have managed to hate the update process, the root ownership of the apps, the lack of option to choose where i want them installed and the garbage that accumulates on your “purchase history”.

This litter is created from every single free app that i choose to download, try out and erase if not useful or the quality i was looking for. With every other app i would download, try, delete the app and the dmg file and there was no more. But not with the App Store. It keeps them there, if i ever want to download 10 different solitaire games again. I might you know?. And the ones i paid and actually want to install again ? i need to look in to all of the garbage to find it, as i can’t simply selectively erase the “purchase history”

Add to that the absolute moronic behaviour in computers with more than one user and different apple accounts, and for me the app store is done. Either they change radically that crashing train or i’m not on board anymore.

When i started thinking about this blog my main point was to alert to the dangers and faults of a company run like ” a small boutique” by an all controlling maestro, that mainly only controls what he thinks is interesting or stimulating, while at the same time all of the other “boring” stuff, day-to-day corrections and consumer care are being neglected and simply exhausted of man-power.

I have no idea of what goes on at Apple. But i do know that you can’t run a company with over 40 K employes that has over 50 millions consumers/users (in the Mac world alone) with a small 100 person A team so that Steve can memorise its names… (( I read that info on a very interesting interview by John Sculley to Macworld i think.)) It’s unheard of and simply it’s not working. Either Apple gets more folks and start having a “regular” enterprise structures (even with all of the unfortunate bloat that carries), without concentrating everything on a small enlightened leader or the big step forward Apple has taken in the last years will be followed by a big client drain as soon as possible (by any other option).

This kind of mess, the mess represented by the idiotic, poorly thought out and completely rushed to the consumer App Store, is just one of the many signals of the deteriorating quality control and attention at Cupertino. You don’t have to be Ballmer to run a company to the ground. Any leader that doesn’t know when it’s time to change gears or pass the ball to another kind of leader, can do that too.