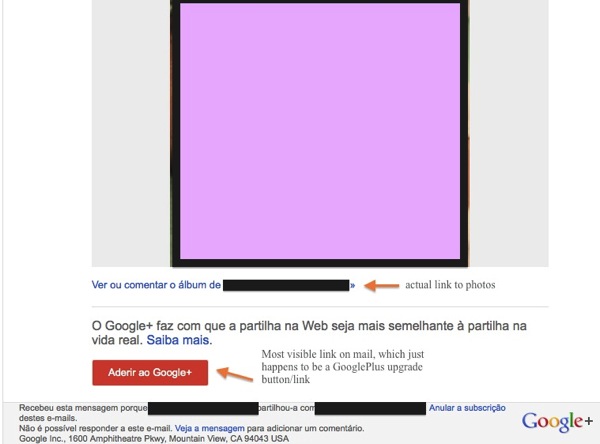 A family member sent a couple of pics from a family event through Google Plus. (( i have no idea why! ))

Please notice the orang arrows i added and see how Google cares so much about you and doesn’t try to stick G+ down your throat… (( yeah, obvious sarcasm.))

I, being a reasonable techy savy guy, had to read the damn thing three times to realize where i should actually click to see the photos. I wonder if the numbers of members of G+ are actually rated the same as Facebook members by the marketeers and advertisers. At this moment it’s more a “number of persons who were conned into signing up” than actual “membership numbers”.

We can learn a lot from observing this transition of power. It goes to show that social products are just as mortal as the people who use them. They grow old and long for the youth they once had. They become set in their ways and burdened by their legacy. They are subject to the ebb and flow of cultural evolution and the fickleness of popular opinion.

What was cool in the 70s wasn’t cool in the 80s. What became cool in the 80s was no longer cool in the 90s. Social networks are susceptible to the same shift in trends and fashion that we’ve witnessed in society before our social lives extended into the digital world. This is why social networks, like Google+ (where I worked for one year), are struggling even more than Facebook to get a foothold in the future of social networking. They are betting on last year’s fashion – they’re fighting Facebook for the last available room on the Titanic when they should be looking at all of the other ships leaving the marina.

It wasn’t too long ago that we thought nothing could stop Facebook. That era has come to an end. There will always be room for new and exciting ways to share and connect with the people that matter in your life.

Google Plus is specially struggling ’cause they’re actively forcing people to become a member instead of letting it grow on its own merits. That fact that they don’t succeed in in growing by its own merits is simply explained by the fact that they have absolutely no merit whatsoever.

By trying too hard to be a replica of Facebook, you essentially get the same product in different packaging. And if there isn’t any specific advantage why would I change? Sure, G+ had ‘circles’ but that’s not an ‘advantage’ in itself. it’s essentially a ‘feature’, easily replicated by FB in a couple of months. An advantage would be something different that FB couldn’t or didn’t want to replicate. Like for example anonymity.

It’s one of the main reasons why I use Twitter. I don’t particularly like the silly 140char limit. Nor the fact that everything is public by default. But for registering with it, I was asked two things: an email address and a username. Not my ‘real name’, not my job, not my Linkedin profile, not age nor anything. A mail and a username. It’s the exact same thing why other platforms such as Tumblr are a strong niche. Despite Mr. Zuckerberg talks about the ‘death of privacy’, people still expect some sort of privacy. They are okay sharing their nude bodies or intimate thoughts or silly interests, they just want to do it on their terms and in compartmentalised, relative anonymity.

Now G+ is created to contend this space and its first option is to enforce the real name policy not only on G+ but on every associated Goole service as Youtube! What exactly is the advantage of that to actual people using it? It’s no wonder why it’s failing, even as other smaller networks are actively growing and removing audience and content from Facebook.

I use this nickname of maccouch for a couple of years now. I have, however, other nicknames that i use since the beginning of the ‘interwebs’. They are a ‘person’ on itself, as valid and consistent id as my real name. I just don’t like to have it directly attached to me because i like that different aspects of my life remain separated. By trying too hard to enforce the ‘real name’ feature in order to create a better profile and sell more to advertisers they just end up making people retreat to the same ‘social strategies’ you employ on real life. Don’t tell anyone about your deep issues, don’t show that you’re in problem, share it only with your closest friends and family.

Now, if that’s the point, then why do we need the social networks again? Their advantage was that you could be talking about your issues with anyone else in the world. And/or share your taste of weird Japanese manga about fighting avocado fruits. And do it all without exposing or sharing too much of the other aspects of your life.

By curtailing the powers of the spy agencies, we could restore the internet to its original functionality and openness while maintaining the right to privacy and free speech – but maintaining a 20th-century copyright/IP model at the same time is impossible. Or we could give up our privacy and other civil rights to allow specific protected industries to carry on coining it in. A last option would be to switch off the internet. But that is not realistic: modern countries could not survive a day without the internet, any more than they could function without electricity.

As a society, we’re going through the painful realization that we can only have two out of the three options. Different corporatist interest groups would no doubt make different choices but, along with the vast majority of the people, I opt for the internet and privacy as both a free channel for communication and the free transfer of useful information.

Like any social change (the abolition of slavery, universal suffrage), this is also accompanied by heated arguments, legal threats and repression, and lobbyist propaganda. But historically, all this sound and fury will signify…precisely nothing. Maybe at some point, basic civil rights will make a comeback, upheld by the legislature and protected by law enforcement.

The choice is simple: internet, privacy, copyright. We can only choose two, and I know which I choose.

I really like the way FaceTime was put together, much more than Skype or other video chat alternatives; specially for one factor: the lack of an ‘online status’!

Yes, many people have complained about this ‘missing feature’, but for me it’s, in fact, not a bug but a feature! I hate having the ‘always seeing eye’ that an online status puts on you. When you reach the office and you turn on Skype, everyone on your contact list knows that you reached the office. When you turn it down to go to lunch, everyone knows that you have gone to lunch. If you are late or early or simply not in the mood, your options are simply to go offline, in which case no one can contact you, or invisible, in which case no one knows that they can contact you, or put the ‘busy’ flag which in work hours is basically redundant and ignored.

FaceTime avoids this by basically being the equivalent of a phone. People don’t know when your phone is on or off, or ‘busy’. They simply call you. If you want to answer, you do. If you don’ want to answer, you don’t. That’s it. No pesky ‘online status’, no “why don’t you answer me if i just saw you change your status”, no nothing. It’s, essentially, a video-phone system.

Of course, there’s some drawbacks to this, such as not being able to have ‘asynchronous’ conversations as you have in ‘chats’. But that is where Messages enters. There, you can just leave a text message, and I will get back to you when it’s convenient to me. And you have all the ‘online status’ paraphernalia.

I used to read some articles, back when Messages and FaceTime were put on OS X, about why were they two different systems/apps. Back then, not having or using neither, I couldn’t really understood this question or essentially why Apple had done it this way.

But now? Really, Apple, great idea! Just leave it like this. It’s a great way and a great software to work.

Now, if you could just opensource the FaceTime protocol as you promised…