“Virtually everything about the Surface tablet is bizarre, even its name, which was previously used for a lumbering series of smart tables—yes, tables, not tablets—that have been unceremoniously recast as PixelSense. But what many on-site reports from the day of the launch didn’t care to mention is perhaps the most bizarre bit of all: The Surface tablet doesn’t even exist. It’s vaporware.

The devices that Microsoft showed off earlier this week weren’t real; they were simply prototypes. And anyone claiming to have gotten ‘hands-on’ time with a Surface tablet was exaggerating, at best: No one was allowed to touch a working prototype, so those typing videos occurred on dead pieces of hardware without a working screen.”

Interesting that this comes from one of Microsoft’s staunchest defenders.

“Surprising revelation: While Mail only supports Exchange ActiveSync (EAS) accounts today, it will support ‘other protocols,’ including IMAP, in the future. I do not personally expect Mail to support POP3-type accounts, but I suppose anything is possible.”

Following RIMM footsteps and their tablet computer for enterprise users that didn’t had an email application, Microsoft releases an email application that doesn’t support the single most used email standard in the world. ((IMAP. I see POP as mainly legacy users or applications))

Where do they get these people? 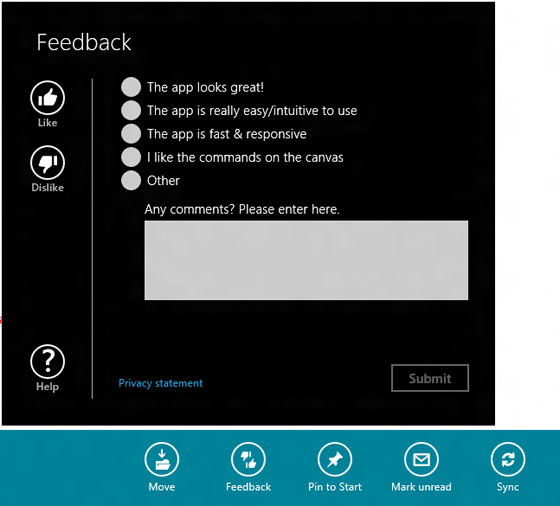 “I’ve been following Windows 8 closely over the past few months, spending a lot of time not only with the official releases but also with a number of leaked builds, and I’ve had the chance to install the operating system on a variety of hardware platforms, both old and new. However, since my primary working platform is a desktop system, this is where I’ve had the chance to spend the most time with Microsoft’s new operating system.

I’m now ready to sum up my Windows 8 experience with a single word: awful.

I could have chosen a number of other words — terrible, horrible, painful and execrable all spring to mind — but it doesn’t matter, the sentiment is the same.

And I don’t say this lightly. I want to like Windows 8. I really do. From a performance point of view, I’ve no complaints since it’s just as snappy and responsive as Windows 7, and will likely get a little better as drivers mature. Hardware support is also excellent; the platform able to handle effortlessly everything I threw at it.”

“SkyDrive has offered tons of free storage for years, but it’s never provided a seamless or simple way to access it from the PCs and devices that people use so regularly. This was, believe it or, by design. In 2009, I was told that the company would never offer seamless, Explorer-based access to SkyDrive from Windows because people would actually use it. And that would require Microsoft to protect and replicate that data at great expense.“

Apparently a leopard can’t change his spots. Every time i read something about a new Microsoft product that i actually consider using or trying out or even, god forbid, recommending to others, Microsoft just goes and shows its truly craptastic nature. It’s like somewhere down there they have this weird desire of being the cool kid and providing everyone with gifts and cool stuff so that they would be liked and popular but then they just can’t resist their lazy-cornercutting-ways and their obnoxious (( i could’t decide on what insult i wanted to insert here. I just went with obnoxious but please, choose your own from its synonyms: unpleasant, disagreeable, nasty, distasteful, offensive, objectionable, unsavory, unpalatable, off-putting, awful, terrible, dreadful, frightful, revolting, repulsive, repellent, repugnant, disgusting, odious, vile, foul, abhorrent, loathsome, nauseating, sickening, hateful, insufferable, intolerable, detestable, abominable, despicable, contemptible; informal horrible, horrid, ghastly, gross, putrid, yucky, godawful, beastly, skanky; literary noisome. )) nature and end up providing you with a cheap knockout of something that was popular 20 years ago, collect-on-delivery, at your expense. I really don’t understand why this hundred thousand employees company could get this distorted culture and modus operandi so deeply entrenched into everything they do.

And now, after this “anecdotal” warning i can’t possibly trust my data into Microsoft’s care because they will probably just screw it up. Or maybe they’re on their finest moment, which is usually followed and preceded by really long crappy ones. With MicroSoft there’s really no way of telling and so, as a precaution, i just try, each time harder, to avoid it all together.

Stardock expects to make some announcements later this year in this area.

Stardock remains concerned about the direction of Windows 8. Since we are not currently a crossplatform development shop, our success relies heavily on the success of Windows.

It is our projection that if Microsoft does not address the following items in Windows 8, then that version of the OS will be considered a general failure:

The times, they are changing…