We are developing a next generation display server known as Mir. A system-level component targeted as a replacement for the X window server system to unlock next-generation user experiences for devices ranging from Linux desktop to mobile devices powered by Ubuntu. This document outlines the motivation for the project, describes the high level design, summarizes the scope, and provides the roadmap of the Mir display server.

The purpose of Mir is to enable the development of the next generation Unity.

Wow! And they’re converting the Unity code to QT/QML. Wow, just WOW! This is so much change for the Linux world that i don’t even know how what this could lead on to.

My guess is that Ubuntu will evolve into a “linux-based” System as different from present day Linux distros as Android already is. And, in my experience, that’s probably a good thing.

Current day Linux distros always suffered from a messed up, scattered approach to a modern home-user system when most of its developers were from the server side or hobbyists. The “professional” full-time developers dedicated to produce a fully usable, user-friendly system for “households” were pretty much a rarity and it noticed. Linux has been much better these last years but it’s still a good mile from its competitors Windows or Mac in many aspects. Ubuntu has been a spearhead into attacking this faults, even if sometimes they seriously messed things up.

Also, if you didn’t try recent Ubuntu versions, do so. It’s a very interesting experience and as much “mac-like” as you can get without it being a Mac.

Today we’re proud to announce Xamarin.Mac, which makes it possible to use C# to build self-contained Mac OS X apps suitable for publication in the Mac App Store. 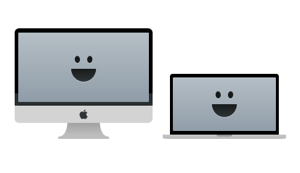 With the release of Xamarin.Mac, it is now possible to build apps in C# for over 2.2 billion devices worldwide: 1.2 billion Windows devices, and using Xamarin, 1 billion Android, iOS, and Mac devices.

Not being a professional developer, I still haven’t understood what advantages exactly has C# and .Net over something else like Java or Python and QT, (( Speed probably? )) but i find Xamarin and Miguel de Icaza efforts to bring this set of technologies everywhere laudable.

And if it can truly increase and speed up the development of cross-platform applications then it should be embraced / helped. There really shouldn’t be a single (( or a duo of )) dominating operating systems. The easier it is for everyone to use several different Operating Systems, the better, richer and safer the technology world will be.

“If you look at the way the world is going, where you see Apple completely in control of their system, and at least part of Windows 8 entirely controlled by the Microsoft App Store, Steam is going to be a little bit harder to do – both in the store aspect and in the content delivery aspect.”

That’s why Valve have turned. They want to make Linux the best little gaming platform it can be.

“We want to continue developing in open platforms and so we’re looking around, and obviously Linux has become a very viable alternate platform. So we are now looking into doing Steam for Linux and supporting as many of our Steam games for Linux as we can.”

Go for it, please! With Apple ridiculously high prices for desktops and Microsoft Windows complete descent into crazyville software, getting a decent gaming machine and putting Linux on it might be the perfect solution for most people that want a desktop machine but at decent prices and with decent software.

If Valve releases a couple of hardware specs and requirements to make sure all their software runs in Linux flawlessly I’m in!

I haven’t tried the new Ubuntu, but i must say that my brief experiment with Ubuntu 12.04 was a quite surprising event. Actually seemed quite good regarding usability and coherence. As soon as i can, i think i will try it out more thoroughly, it definitely seems to have the potential to be a capable Mac OS X replacement for most folks / standard “PCs”.

The problem? An underfunded school needed computers for the classroom. Budget? $0. Staff involved? Just one: Robert Litt, a sixth-grade teacher.

With the help of his local LUG, he got Linux up and running on his 18 donated machines. Suddenly, they were fast. They were clean. They worked well in the classroom. Robert was invigorated, as were his students. His principal saw how excited they all were, and decided to give Robert four hours of teaching leave per week to give him time to find more computers for a full lab for ASCEND. And so Robert became a “teacher on special assignment,” as he puts it.

Finding computers was less difficult than he originally anticipated. Most families and businesses have an old computer (or ten) sitting in storage. Robert began to call businesses and ask for donations of equipment they’d otherwise be sending for recycling. People were generally very receptive. Most people would rather their used computers do good than rot in a landfill or get shredded; they just don’t usually know how to get computers to where they are needed. “Underfunded schools are starving in the midst of plenty,” Robert explains. “Discarded computers are our nation’s most wasted educational resource.”

For old computers, specially old desktops, there’s nothing that comes close to Linux distros. They run on everything, they are fast, they are nimble on resources and they can give you a lot of simple free software for basically everything that you want to do.

I personally recommend and use Linux Mint. It’s not perfect but it’s a great OS, much easier to maintain than Windows and much, much safer too.

“Steam’d penguins? Is it a recipe for an exotic South Pole dish? Perhaps it’s one of those bizarre YouTube videos of penguins in a sauna cavorting with the Swedish Bikini team?

The truth is that this is the first post of the Valve Linux blog. This blog is where you can find the latest information from Valve about our Linux development efforts. Avoid the rumors and speculations that multiply on the Web. Instead, come to the source – a blog where people who are interested in Linux and open source game development can get the latest information on Valve’s efforts in this arena. In this initial post, we’ll introduce the team (and a bit of its history) and then give you a snapshot of what we’re currently doing.”

And so, it begins.

While Microsoft is out playing “catch the running Apple in every direction”, every “place” where it had exclusivity or a strong presence erodes. Finally, Linux users won’t have to reboot in to Windows or use Wine to do games. It’s just a couple of games now, but the flood doors have opened. Finally!

“For the first time, Microsoft appears on list of companies that are contributing to the Linux kernel. Ranking at number 17, the company that once called Linux a “cancer,” today is working within the collaborative development model to support its virtualization efforts and its customers. Because Linux has reached a state of ubiquity, in which both the enterprise and mobile computing markets are relying on the operating system, Microsoft is clearly working to adapt.”

I’m not sure how Microsoft could just leap into the the top20 but i must admit it has the pretty sweet taste of ultimate irony.

You can download the entire Linux Foundation report here.

Update2: It’s here alright. You can download it and install it. But beware as it is still highly experimental. It seems to have a lot of potential though.

Finally! It’s here, it has arrived! Open Media Vault, the Debian based somewhat-successor to FreeNas is launched!!

I’ve been consulting the site for over a year and half or so, waiting for a chance to download the software, but the lead and single developer kept us all on the hook for it.

I respect immensely any one that can do such a feat single handedly but i must admit i was loosing my patience waiting for it; specially because i’ve got a low-energy consumption device waiting for it! Couldn’t get FreeNAS to recognize the esoteric hardware, couldn’t get any Fedora based distro because the processor wasn’t a “modern” i686 (despite running at 1GHz) but Debian, faithful to itself, runs like a charm on it. So will Open Media Vault i expect.

Now, there’s just a little problem… I’m away for the weekend so i can’t try it out!